People with autism often have a particular subject matter that they are really obsessed with. I've experienced a wide range of them, from a 6 year old who loves ocean creatures to a kindergartener who loved to talk Angry Birds to an 13 year old who did school work to get to look at pictures of trains on the internet . And in fact, Thomas the Train is very compelling to a lot of autistic children. I've worked with one preschooler that was totally obsessed and have heard specialists who was giving a talk about the autism saying something like, "there's always been a particular interest, even before Thomas." Not everyone with autism has a special topic that they love, but if you find yourself interacting with someone with autism, don't be surprised if they have a subject matter they're as knowledgeable about as we are about nail polish!

I've got Sweet Peacock back in November but it was one of my untrieds until now. It really shouldn't have been, given how much I love turquoise. I'm glad to report that this one is beautiful, and impressed me on the nail more than it did in the bottle.  I also sponged the tips to try out China Glaze Cleopatra. It's one of my friend Esmeralda Pearlfinish's favorites, and now I can see why. To see more pictures and learn how this mani came about, join me after the jump!

This manicure  happened purely by chance. I happened to go over to Esmeralda's place soon after she got a bunch of Bundle Monster plates, and she was as eager to share as I was to see them! We experimented with them for a bit, while I decided which of Esmeralda's polishes to try out for stamping over Orly Sweet Peacock.  I ended up adding a couple of gold decals to 2 of my nails. I thought that the other nails looked too plain without them so I added gold stamping with Sinful Colors All About You to all of them.  After that, I decided that I wanted the right hand to have the same color scheme, so I added gold sponging to the tips.

As soon as I saw Cleopatra among Esmeralda's golds, I knew it was the gold I had to try. For a while, it was Esmeralda's favorite polish! She still loves it, but there are a few other colors competing for the number one position now. I was pleasantly surprised at how well this color worked with Sweet Peacock. It's a warm gold holo glitter that is very sparkly and fun!
Now, onto the fail part of my mani. As soon as I used my left hand for something, the 2 nail decals smudged off.  I really liked the original look with the decals and stamping.  My pics aren't that great, but the middle and ring finger both have dents where the decals used to be. I guess now I know that this is a color scheme that I like, and to avoid decals if I'm not taking pictures right away! 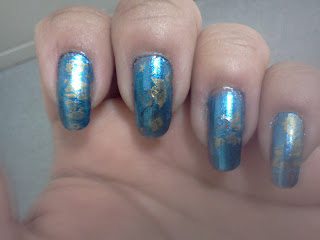 Posted by Impoverished by Polish at 8:24 AM